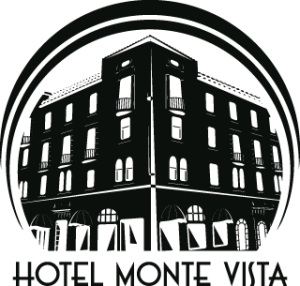 History of a Flagstaff Legend

Towering above the corners of Aspen and San Francisco Streets, The Hotel Monte Vista stands just off historic Route 66 as a true touchstone for all of Flagstaff and her citizens. With the mountains and nearby canyon countries, The Hotel Monte Vista is your place to relax while you explore all of the natural wonders Northern Arizona has to offer. The Hotel Monte Vista remains the centerpiece for Historic Downtown Flagstaff. Staying here can give you a true glimpse into the spirited lifestyle of the Great American West. 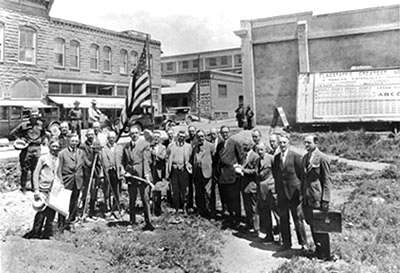 When tourism was on the rise during the mid-1920’s, local residents agreed that Flagstaff needed first-class accommodations. Existing hotels were old and outmoded. Fundraising began in April of 1926, and within one month, investments of prominent citizens and funds donated by the novelist Zane Grey, totaled approximately $200,000. Ground was broken on June 8.

Construction plans for the 73-room hotel incorporated the local Post Office (1917-1927) and the structure, no the Monte V Cocktail Lounge, housing the newspaper company, Coconino Sun. The new hotel opened for business on New Year’s Day, 1927. Originally named the Community Hotel, in honor of the townspeople who contributed to its existence, the name ‘Monte Vista’, meaning mountain view, was chosen by a 12-year-old contest winner.

The Monte Vista continued to be the longest publicly held commercial property in Arizona until it was sold to a private investor in the early 1960’s. It continues to be one of the oldest hotels in Flagstaff and is listed on the U.S. Registrar of Historic Places. The Hotel Monte Vista is truly one of Northern Arizona’s unique treasures. 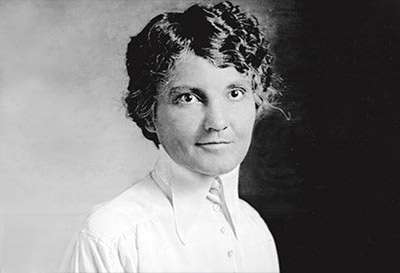 Mary Costigan was the second woman in the world to be granted a radio broadcasting license in 1927. Hailing from Detroit, Costigan relocated to Flagstaff to help her brother, John, and his business partner, John Weatherford, run the Majestic Opera House.

After years of assisting with the family business, Mary took over due to John’s deteriorating health. She then became a licensed commercial radio broadcaster and set up a 25-watt station backstage at the Majestic Opera House, now the Orpheum. In 1929, Mary moved KFXY to the Monte Vista Hotel. More than four hundred residents showed up for her maiden broadcast kicking off the powerful 100-watt show airing three hours a day. 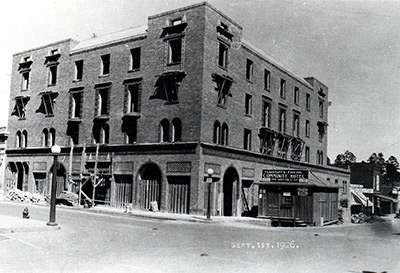 A system of underground tunnels, rumored to have been built by Chinese immigrants, snake their way from Northern Arizona University up through downtown Flagstaff. Businesses including the Weatherford Hotel, Babbitt’s Backcountry, and the Monte Vista have access to these basement tunnels. In the early 1900’s a devastatingly large fire damaged many buildings in downtown Flagstaff. Chinese migrant workers were blamed for the fire because of their cooking and cleaning practices. After that, the Chinese began to use these systems to get around town without being harassed. Now used for storage and piping, it is said the larger alcoves of the tunnels have been home to more suspicious activity. Opium dens, moonshine distilleries, gambling machines and other relics have been discovered in depths of Flagstaff’s underworld. 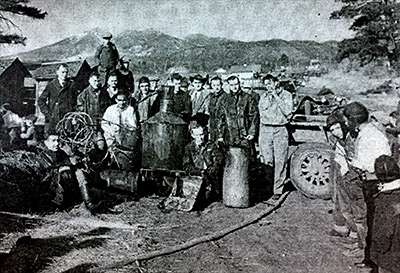 The Cocktail Lounge opened during the prohibition era under the guise of a newspaper publishing house. Rumor has it that during this time there was a major bootlegging operation and speakeasy in this space. Local officers put an end to it in 1931. The popular speakeasy was forced to shut down only to reopen two years later when prohibition ended in 1933. 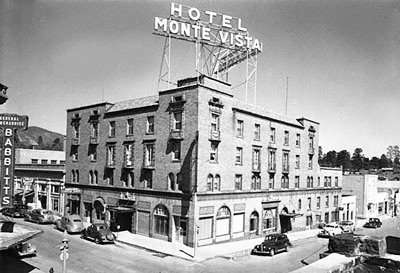 A light atop the hotel served as an emergency signal for Flagstaff in the 30’s. Flashing, it would alert local authorities and citizens of hazards and catastrophes in and around town. The hotel’s current neon sign is still a beckoning light for locals and travelers alike.

The Hotel Monte Vista was the premiere lodging choice for many Hollywood stars. In the 40’s and 50’s, Western films were on the rise turning the wheels for more than a hundred movies to be shot nearby Sedona and Oak Creek Canyon. During these filmings, the Hotel Monte Vista hosted such famous guests as Jane Russell, Gary Cooper, Spencer Tracy, John Wayne and Bing Crosby. The hotel has even been featured in Hollywood scenes; notably Casablanca and Forrest Gump.

Mary Costigan was the second woman in the world to be granted a radio broadcasting license in 1927. Hailing from Detroit, Costigan relocated to Flagstaff to help her brother, John, and his business partner, John Weatherford, run the Majestic Opera House.

After years of assisting with the family business, Mary took over due to John’s deteriorating health. She then became a licensed commercial radio broadcaster and set up a 25-watt station backstage at the Majestic Opera House, now the Orpheum. In 1929, Mary moved KFXY to the Monte Vista Hotel. More than four hundred residents showed up for her maiden broadcast kicking off the powerful 100-watt show airing three hours a day. 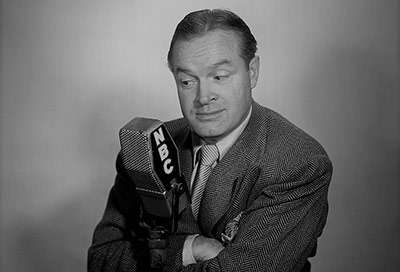 Bob Hope – An English-born American comedian, actor, singer, dancer, author, and athlete who appeared on Broadway, in vaudeville, movies, television, and on the radio. He was noted for his numerous USO shows and entertaining American military personnel between 1942 and 1988. In 1996, the U.S. Congress declared him the “first and only honorary veteran of the U.S. armed forces.” During his 60-year career, 1934 to 1994, Hope appeared in over 70 films and shorts. 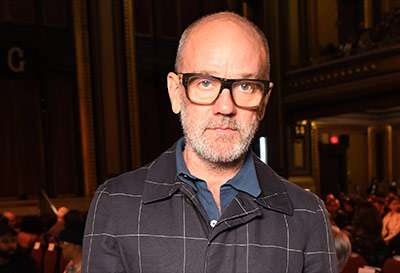 Michael Stipe – An American singer, lyricist and visual artist, he was the lead vocalist of the alternative rock band R.E.M. from their formation in 1980 until their dissolution in 2011. Outside the music industry, he runs his own film production companies. 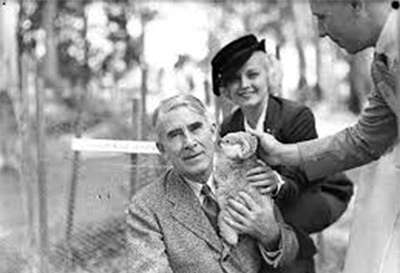 Zane Gray – An American writer best known for his pop-fiction adventure novels and short stories that presented an idealized image of the Wild West. His oeuvre contains over 90 novels, including his most influential work, Riders of the Purple Sage, which famously exemplifies his endearment for the American Frontier. The Hotel Monte Vista is mentioned in numerous tales as he spent much time here writing and drinking. 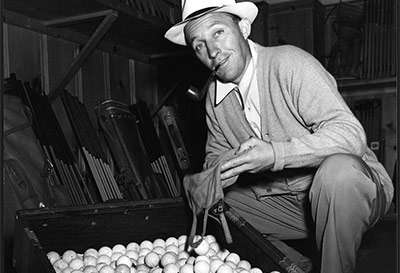 One of the first multi-media stars, Bing Crosby’s bass-baritone voice held command of record sales, radio waves, and motion pictures from 1934-1954. In 1962, Crosby became the first person recognized by the Grammy Global Achievement Award. He is renowned for having three stars on the Hollywood Walk of Fame. 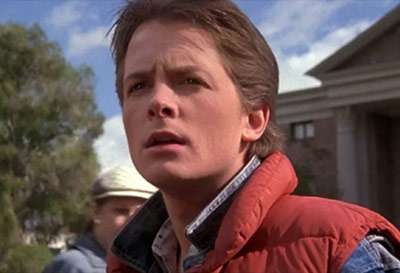 Michael J Fox – A Canadian-American movie and television actor. He is best known for his role as Marty McFly in the famous film trilogy Back to the Future. Currently he is an activist for the research and awareness for the cure to Parkinson’s disease. 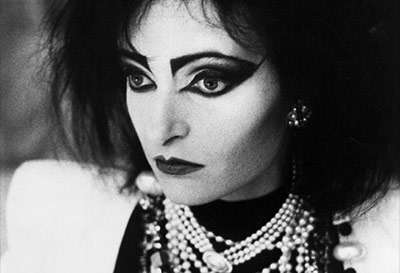 Siouxsie Sioux – The lead singer of Siouxsie and the Banshees, one of the original English punk rock bands. After starting the post-punk scene through the addition of pop and rock sounds, they influenced many genres, particularly goth rock and psychedelia. Though the band dissolved in 1996, she still continues to work on music and influence other artists today. 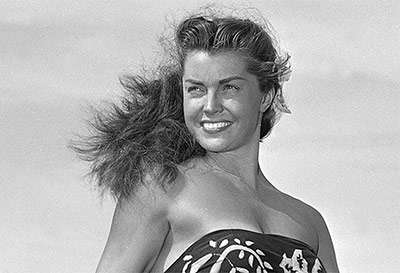 Esther Williams – A successful American competitive swimmer whose career was halted by the outbreak of World War II. She evolved her swimming career into a movie career creating a series of films known as “aquamusicals” and became a popular MGM movie star. 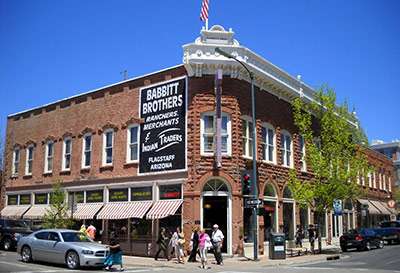 George Babbitt – Part of one of the founding families in Flagstaff and a former Governor. The Babbitt family had major economic and political influences in Northern Arizona, evident today through many buildings and signs in town.

The Monte Vista has always been known for rumors of hauntings. As with nearby buildings of similar age, there are spirits haunting some of the rooms and the halls. With such a colorful history, it is no surprise some spirits stick around for an eternity. We encourage communication with the ghosts if you are looking for an extraordinary experience. If you would like to hear about some of the phenomena, feel free to ask the employees around the building. Our wonderful housekeeping staff has some of the most intriguing tales. 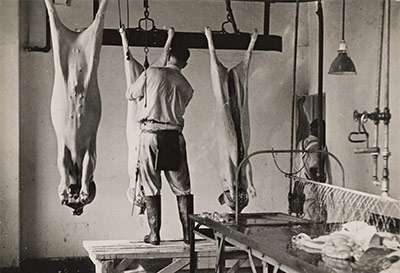 This bizarre long-term boarder was known by his strange habit of hanging raw meat from the chandelier. In the early 1980’s, the lodger was found in his room three days after his death. Not long after this boarder’s death, a maintenance worker was working on a few repairs. When in need of a new fixture he left the room, turned the lights off, and locked the door. Returning only a few minutes later, he found the television on at full volume and the linens on the bed had been ripped and scattered around the room!

Today, it is common for the television to act on its own accord as well as reports of cold male hands touching guests in their sleep. 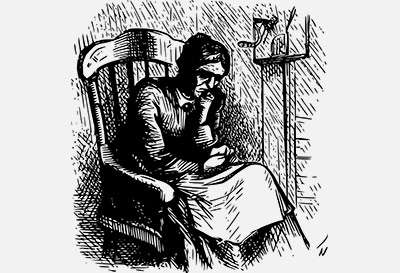 Featured in many paranormal shows and popular amongst curious guests, room 305 is by far the most active room in the hotel. There are numerous reports of seeing a woman in the rocking chair near the window. Guests and housekeeping have reports of seeing the chair move by itself and knocking coming from inside the closet! History tells us that years ago an elderly woman who was a long-term renter would sit by the window for hours on end. No one knows what she was looking at or looking for. Could it be she is waiting for someone to return, even in death? 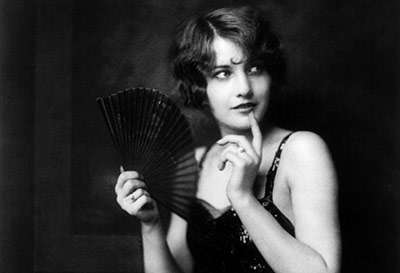 Years ago Flagstaff’s Red Light District could be found just south of the railroad tracks, just two blocks from the Monte Vista. In the early 1940’s two prostitutes were brought to room 306. During their “visit” they were killed and thrown from their third floor window to the cold street below.

Over the years, numerous guests have reported being awakened in the middle of the night and unable to return to sleep due to a feeling that they are being watched. The majority of the time, our male guests report the feeling of having a hands placed over their mouths and throats, and awakening unable to breathe. 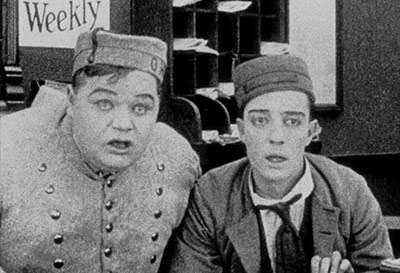 Hotel guests have reported a knock at their door and a muffled voice announcing “room service”. When guests open the door, no one is present. However, some guests have seen the figure of a bellboy standing outside of room 210. John Wayne experienced this ghost during a few of his stays. Mr. Wayne reported that the ghost seemed friendly and that he did not feel threatened by its presence.

Our housekeepers frequently experience the antics of the bellboy. One report states seeing a young male in an old fashioned red coat with brass buttons walking up and down the halls. 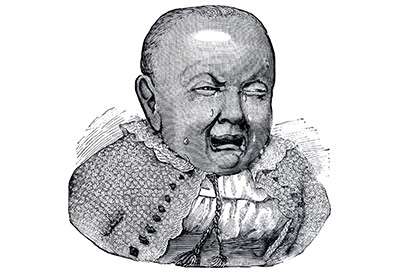 Baby in the Basement

The disturbing sounds of an infant crying in the basement have been heard again and again. Reported primarily by maintenance & laundry personnel, this is one of the most disturbing encounters. Staff have found themselves running upstairs to escape the sound of the cries. Though the sounds are very real to those who hear them, there has been no information that has explained this phenomenon. 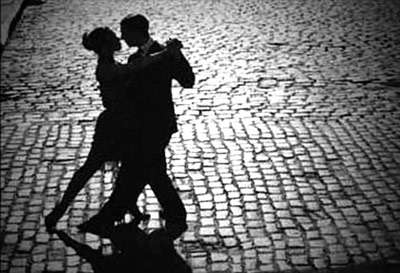 On several occasions lounge staff & patrons have witnessed a transparent couple dancing in the Cocktail Lounge. They are seen in formal dress laughing and smiling, eternally dancing. 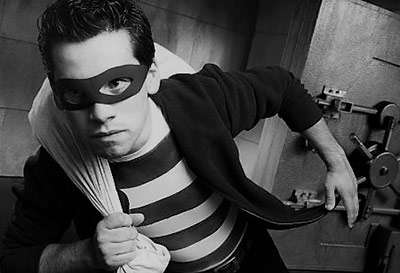 In 1970, three men robbed a nearby bank. During the robbery, a bank guard shot one of the men. Despite their injured comrade they decided to celebrate by stopping in the lounge to have a drink. The wounded man bled to death while enjoying his last drink. Since then both patrons and staff have reported being greeted by an anonymous voice saying “Good Morning!” There have also been reports of barstools and drinks that seem to move on their own.